Hanna’s smile illuminates,
who she IS radiates love, strength, wisdom, kindness and compassion.

I am deLIGHTed to share with you the remarkable journeys of Alisha and Hanna, our BE{loved} Nepali friends – sisters reunited after twenty years of separation imposed by slavery in the brothels of Nepal and India.  The ripples of hope and invitations to justice rising from their stories have been so pronounced that three former traffickers are now part of their rescue team – a glimpse of this extraordinary story is below.  And, we meet Sarita, a thirteen-year old girl rescued from the brothels of New Delhi in January.  A chapter of the beginning of this remarkable community transformation is shared by our dear friend and brotha, Håkan Gabrielsson, founder of Out of Ashes.  Are you ignited to do something?  If so, we close with some kula {community}offerings of what we can do…together.

What a joy it has brought to our lives to have connected with our extraordinary sistah, Hanna, having hosted her Nepali team last fall for a week of adventures and gatherings.  {Many in our Denver village joined the fun and extended extravagant hospitality to our friends…whew!  Thank YOU.}

Hanna Badi, in her own words | written by Anjila Shrestha

My Past? Is it supposed to be fear-inducing knock with my every thought? Is it a black smudge on my heart that can never be cleaned? Is it something that I have to live the rest of my life with; like living under a black cloud? Or, can I take it as a challenge to face the world?

The horror of being mentally abused, misused, misguided is nothing in comparison to the reckless and consistent pounding of my heart while I searched for safe and loyal hands that would never leave or hurt me. I was born by the riverside in Surkhet district into a poor and ostracized Badi community.

While growing up, many girls disappeared from my village when they were sold into the brothels of India. It was heartbreaking and too much to bear when one day my elder sister was also sold. I became mentally and physically sick due to the dreadful thoughts that always swirled around in my mind as I feared that my sister’s fate would one day become my own.

The hope of good people existing on the earth simply died when I encountered the lustful act of a doctor. I think that in order to try and protect myself and forget the actions of that doctor; my body would shutdown and I would faint. I constantly locked myself inside a room in fear of what other people might do to me.

But … this is gone. I think enough tears have rolled down my cheeks to wash away my nightmares. The opportunity I received when I was thirteen totally and completely changed the course of my life. I was invited by Light House Foundation Nepal to live in a hostel in Kathmandu.

Immense peace and joyful tears were flooding down my face as I entered the hostel in Kathmandu. My next surprise was when I was given a school uniform and allowed to go to school. That was the most perfect moment; I never believed that I could be that happy…

I’m blessed to be a part of Lighthouse Foundation and will forever remain thankful for the work they are doing to help the destitute, poor and deprived women and children.” -Hanna Badi, in her own words | written by Anjila Shrestha

Several months ago, we shared of Alisha’s rescue from the brothels of New Delhi, India and our Seeds kula’s beautyFULL responses of blessing and hope.

Excerpts of updates shared by our dear friend and brother, Håkan Gabrielsson | Out of Ashes

“2016 started with a great kick-off for the anti-trafficking work. Already in the first few days of this new year nine children were rescued from brothels in Delhi. We sponsored a team of our beloved brothers and sisters from Kathmandu who traveled to Delhi on a rescue mission led by Raju Sundas [founder of Light House Foundation, Nepal].

They were able to bring back nine children with three more coming soon. Alisha was also a part of the team and that itself is a great miracle.

There is an ongoing healing taking place in Alisha’s life after twenty-one years as a slave in the brothels. Almost all of the women that have been rescued from sex-slavery are themselves involved in rescuing and restoring other victims.  Alisha has been a great inspiration to many.

Three women that have been involved in selling hundreds of girls over the years, returned with the team to visit the girls’ homes.  Raju writes, ‘These three women have been working in the brothels as traffickers for 20 years and have sold hundreds of girls. When I was in New Delhi I went to see their brothel and found that there are 1,000 Badi women presently enslaved.'” -Håkan Gabrielsson

While visiting our rescued girls and seeing our work in Kathmandu, they told us they will no longer be involved in the business of sex trafficking and will now help us to rescue thousands of other girls and women. -Raju 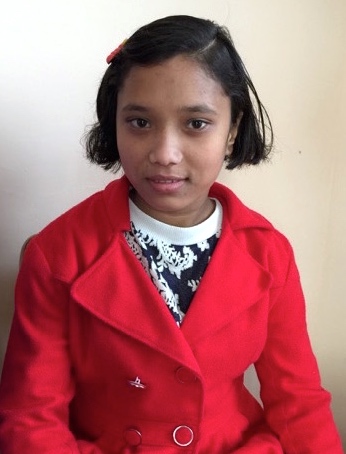 “In January, we heard the stories of the girls together with Sangita, head of the hostels in Kathmandu.  One of the testimonies was from thirteen-year-old Sarita Badi [one of the girls pictured above], rescued from the New Delhi brothels in January. It was a daring rescue operation performed by Lighthouse Foundation together with Maiti Nepal.

Sarita’s mother was often sick during her childhood and her father was constantly abusing and beating the children. He abandoned the family when Sarita was eight and they have never seen or heard from him since then. Because of their poverty and the mother’s sickness, she couldn’t care for the children properly, and a neighbour took advantage of that and sold Sarita to a brothel in GB Road in Delhi. She was drugged with something that was put in her tea, and then transported over the border to India where she woke up in a brothel in Delhi.

She was twelve years old and the very first day she was raped by many men one after another the whole night. She finally fainted because of exhaustion and pain and she woke up in the morning with her bed covered in blood, her own blood.

Months of sexual abuse and beatings followed. She was forced to sleep with fifty men a day and if she couldn’t fulfill the quota, the owner would increase her quota or beat her more.

She tried to escape a number of times but was caught and mercilessly beaten. She had to go through five abortions and was sick because of complications, yet she had to continue to do her quotas. (Almost all the girls that Lighthouse Foundation receives have gynecological health problems that require medical attention for a long time.)

Lighthouse staff in Delhi found out about her and the team travelled from Kathmandu to take part in the rescue. It was a dangerous operation but it was successful. She was brought to Kathmandu and is now in one of the homes.

Tears were running down her cheeks when she was telling her story as the pain is great, but now she is free. She has escaped the hell of that brothel and she has a future.

Her three younger sisters who were almost sold to the brothels have also recently come to live in the homes.” -Håkan Gabrielsson | Out of Ashes

Dear friends, Sarita’s story is heavy and unimaginable.
How are you this moment, after taking in it?
If overwhelmed, tense and troubled, you have company.
Many of us are with you.

If you have a moment to pause, breathe, read some poetry and
read about a friend’s experience of secondary trauma in response to her encounters with the shocking reality of human trafficking,
check out this post: When darkness overwhelms, a message of HOPE.

I remember very well that day in February 2009 when I met Raju Sundas, founder of Light House Foundation, and the first time I visited the area in western Nepal where the Badi people live. The visit shook me and moved me deeply, and that experience was the seed that was planted in our hearts to start the work to save girls from the sex trade. We decided to offer a way out of slavery by starting a girls’ home in Kathmandu. The date was set for December 2009.

On my visit, I took thirty photos of girls whom we invited to come and live at the home we would start. Three of the photos were of the girls in the top row. The bottom row [photos by Love Nepal] are the same girls, six years in-between.

Seeing the little girls that looked like baby birds with broken wings in February 2009, and now they are young, strong, beautiful, bold girls who go to school and are preparing for university, it’s almost unreal. It is so moving. Are these the same girls?

This is what we live for, what we cry for and rejoice over; to see freed, transformed, bold girls who go from slavery to freedom, from darkness to life.

The small seed that was planted then with thirty girls has grown to a large tree as there are 619 students in eight hostels in Kathmandu and two in other towns. There are now many who water, some with large water jugs and some with small water jugs, but it is growing fast…” -Håkan Gabrielsson | Out of Ashes

Want to DO something?

“The surest way to the heart is through song and story…I do not know why this should be, but I believe it to be true…Perhaps it is how we are made; perhaps words of truth reach us best through the heart, and stories and songs are the language of the heart.” –Stephen Lawhead, Merlin