Book Launch in Nepal with the Right Honorable President

TODAY, our book – No Longer Untouchable: A Story of Human Trafficking, Heroism, and Hope – was launched in Nepal from the hands of the Right Honourable President Bidya Devi Bhandari of Nepal! (Yes, that is the full title of the President of Nepal – from here on out, I’ll refer to her with respect as the President.) The picture of Devisara Hannah Badi and me above was taken by the President’s press photographer.

I’m going to break epic and exciting day down into time increments for you in which we nearly missed the opportunity of a lifetime by being late – yes, ’tis true! – to launch our book in the private press club in the private residence of the President of Nepal. (Try saying that 10 times fast!)

Pull up a chair and pour yourself a cuppa tea.

This is not a short tale … nor is it boring.

2:30 pm | Just after lunch, we walked quickly down a hill to a school bus, in which we were riding with some of the kids from the surrounding children’s homes.

As we walked, our book’s lead storyteller and activist, Devisara Hannah Badi’s dog, Castle, escaped – running after her like mad. We shouted for her little sister to come get her where we were loading into the bus, and when she came to get Hannah’s dog, we realized that the 30 books we needed to bring for our launch had not yet been loaded into the bus.

So, back up the hill to the dormitory to get the books raced a few of the fellas (since we did NOT want to mess up our saris)!

3 pm | The bus rumbled to a start and Hannah and I autographed books, as we bumped along in the dusty road.

Hannah’s phone was blowing up – ringing every 30 seconds or so – from our friends who had arrived at the President’s residence ahead of us, asking where the heck we were! 3:30 pm was the time we were SCHEDULED to begin our program. The President was in the room at 3:30, but we were not there.

Instead, at that time, we were still 20 minutes from her residence … so she LEFT THE ROOM and our team that was there – quite understandably, FREAKED OUT! They didn’t know if – or when – she would come back. So they waited – and hoped and prayed! – as we raced toward the President’s home.

3:30 pm | As we were racing – as fast as a school bus can through the always-traffic-ridden streets of Kathmandu! – in the school bus with the kids from the dormitory, Hannah told the bus to pull over.

Come, Sarah and Buba (Nepali for “Dad”)! We will go ahead in a taxi! We are going to be too late if we stay in the bus.

So, we hopped off the bus, Hannah hailed a taxi, the bus driver piled the books on top of Hannah and me in the back of the taxi and Papa got into the front (a place of honor). Hannah pleaded with the taxi driver to use his emergency lights, which he did. As we raced to President’s home, he drove in the wrong lane (=oncoming traffic) for much of the trip, playing “chicken” with cars, motorcycles, tractors, cows, and honking his horn the WHOLE TIME.

3:45 pm | We pulled up to President Bhandari’s residence. Hannah said, “Now, Sarah didi (“sister”), we RUN!” Buba (“Papa”), Hannah, and I RAN through the President’s compound, passing as quickly as we could through 2 security checkpoints, and then we saw our friends who had arrived before us and were waiting / pacing / stressing for us to arrive.

We breathlessly said, “Hello!” – and then went through our next 2 security checkpoints. There was a moment – as we briskly walked from our 3rd security checkpoint to the 4th and final checkpoint and the President’s private residence, when my dad and I were together. I put my arm through his, and tried to say, “Dad, I’m so glad you’re here for this” – but got choked up. Instead, I said, “Well, we won’t forget this, will we? Help me to remember all of the dramatic details, OK?”

(Yes, we were *20 minutes late*!) Entering into a large room (imagine a large banquet hall), we came to the President of Nepal’s residence and press room.

In this room, there were four cameramen, four photographers behind a roped off area. At that point, about 30 people were in the room, including one of our storytellers – the others were still on the bus racing (more like, rumbling!) to reach us. Five large bouquets of flowers were placed on the seats where the storytellers would sit in the 2nd row. Hannah, my dad, and I were led to the first row. A mic’d podium was to the left and in the center of the room was an 8×10-foot rug with a large gold chair and a coffee-table in front of it (where the President would sit).

4:10 pm | In walked the rest of our crew from the bus … including three of our heroic storytellers, along with 15 girls from the children’s home. One of our storyteller’s daughter’s immediately threw a mighty fit – which prompted some audience members to furrow their brows and turn around, motioning for her to go to the back of the room. Our other storyteller’s baby also got noisy, so she began to nurse him (which prompted another round of furrowed brows and glances). Undeterred, she didn’t stop, and her baby fell asleep.

Then, we waited and waited – for an hour or so.

During that time, I got a tickle in my throat, and could feel a coughing fit coming on. I tried to clear my throat, swallow my own spit, lower my mask to breathe a bit, and it wasn’t working. I coughed once … then again. Looking at Hannah, I asked for some pani (“water” in Nepali). There was only a bottle in sight, right next to the President’s chair. Hannah grabbed my hand and we prayed, quietly. The tickle in my throat did not go away. I was, most definitely, on the verge of a crazy coughing fit. My sweet bahini (“little sister”), Esther, appeared just in time and handed me a cup of water. I drank it, gratefully, and it calmed my coughing fit sensation.

We kept waiting. I turned around a few times to see each of our beautyFULL storytellers – all four! – sitting behind me. Hannah sat next to me. What a wonder! As I waited, I prayed … for the room to be filled with the the love and light of God, for my spirit and WORDS to be fueled by the Spirit, for the grace to not rush the moment. Even though it was hot and stuffy, we were sitting in the President of Nepal’s press headquarters! I kept thinking, “Take it in, take it in!”

Then, a curtain opened. People stood. And in walked President Bidhya Devi Bhandari. She took her seat in the big throne-chair and we all sat down. The program began. Hannah approached the podium first for her speech. (Even though I don’t speak Nepali, I could tell by the electricity in the room that she rocked it!) Then two men of influence, including the Minister of Children’s Affairs. (A very stately and regal man.) Then, me.

I was told that it’s not good to walk with your back to the cameras, so I needed to try to keep facing the cameras as I walked. Hmmm … not sure if I did that well. I walked up to the podium, caught the edge of my sari on the platform, tugged it off, teetered a bit on my heals, took off my mask, put on my glasses, and began.

I tried to talk slowly, purposefully, prayerfully. (I’ll share my speech in a moment. It was approved by the President’s office of affairs. I had to make a few edits, including adding “Right Honorable” before “President” in 2 places.)

And then President Bhandari spoke. Hannah later told me that the President was very, very encouraging and affirming of our whole team of storytellers. She said that we all did what the government of Nepal should have done and that she hoped we can all work together in the future. She expressed gratitude to me for my part in raising the voices of these sisters. The President spoke quietly – it was almost hard to hear her, even, when one of the soldiers flanking her moved the microphone closer. But, I loved her quiet, gentle grace, and palpable strength. We locked eyes a few times. (She is a compassionate sister, I could feel it.)

Then our five heroic storytellers walked up to her and each gave her a big bouquet of flowers – one at a time, placing flowers in the arms of the President of Nepal. What a thing!! What an honor. I love that they each got a place in the limelight!

Funny side note: We didn’t know exactly when the flower ceremony was happening and during a moment in which one of our storytellers was nursing her baby boy, suddenly, it was her moment to walk up and hand flowers to the President of Nepal. So, she quickly handed her baby to her friend sitting next to her, covered herself with her scarf and walked up, in front of national network cameras, and did what she needed to do. Then, came back and went back to nursing her baby – taking care of business and making history, while taking care of her little one. This was a picture of what has happened over and over in our collaboration.

There was a moment where Hannah took on a silver platter a pair of our books, which were packaged beautifully in plastic cellophane. The President took them, placed them in her lap, and tried to open the package – but the wrapping was too tight. So, one of her soldiers who stood just off to the right of her tried. Then another came to help. Together – two soldiers and the President of Nepal – loosened the wrapping and pulled out our books. The President held them in her hands for a few moments, looked up at us and smiled.

Then, it was over.

We went outside for a group photo, and then, we piled back into the bus and went home. Here are a few glimpses of our book launch with the Right Honourable President Bidya Devi Bhandari of Nepal: 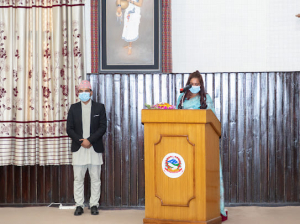 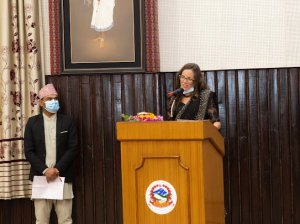 Me, giving my speech 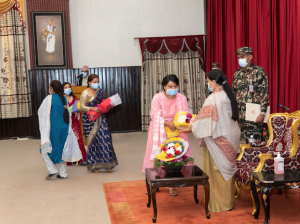 Our storytellers, offering flowers to the President 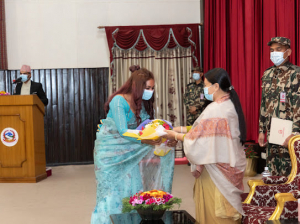 Hannah giving flowers – and our book – to the President 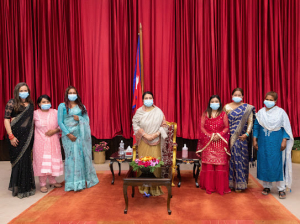 Our storytellers, the Right Honourable President, and me 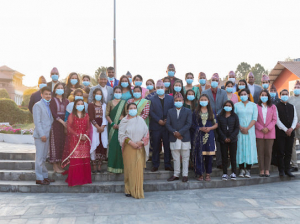 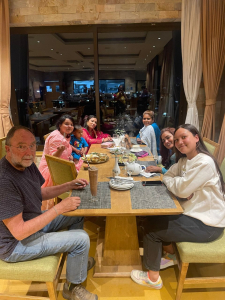 The after-party is always SUCH FUN … and THIS night, it was especially a great joy!!! My Buba (“Dad”), bahiniharu (“little sisters”), and I FEASTED on pizza, soup, milkshakes, Nepali thali (a DELISH combo of rice, daal, veg, pickled veg, yogurt, and MORE. We headed back to our home-base: the always-amazing Hotel Tibet International.
Sarah Davison-Tracy2023-01-18T17:46:03-07:00