Courtney Boyle has fallen in love with the place and people of Pakistan and is working with the Marshall Direct Fund to create the Denver Premiere of the film, He Named Me Malala.  3 Links:  1) Seeds blog post about the film, including trailer, 2) Denver premiere tickets {including powerful Q + A following the film}and 3) find a theater near you.

In March, she traveled with her daughter, Claire, to Pakistan.  She offers us glimpses of her heart from the pages of her journal, when she lived and worked in Pakistan in 2012.

Pakistan is a complicated, beautiful, tragic and often misunderstood country. Some days I feel like this place is mad, other days I see so much beauty. I hope what I’ve shared helps to tell the story. 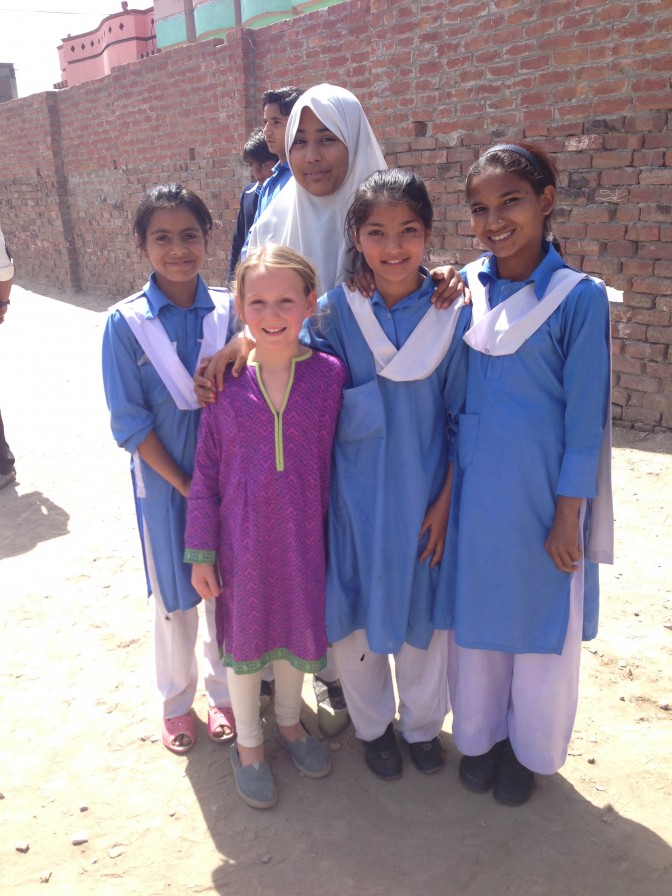 Courtney’s daughter, Claire, at one of the girls’ schools started by Marshall Direct Fund.

Part 1.  Driving through the city of Lahore, the country of Pakistan begins to unfold.  Families with children lying on cots along the side of the roads.  Lush, green trees lining the main roadways.  Barbers, with their chairs and mirrors, providing haircuts to men and boys roadside.  Piles of garbage.  Electrical lines hanging between buildings.  Women in beautifully colored shalwar kurtas and dupattas (shawls), some in black burqas.  Men in shalwar kameez (traditional shirts and pants), their heads bare or sometimes wrapped in scarves and turbans.  Children jumping from bridges into the river.   Families riding on donkey-drawn carts and wagons.  Streets filled with cars, motorbikes and rickshaws (small motorized vehicles – the Pakistani version of a taxi), all driving with little or no attention to common laws of traffic.  Men rummaging garbage by hand.  Soldiers with machine guns guarding military landmarks.  Beggars.  Goats tied to trees.  Makeshift squatter settlements in open spaces and town centers.  Children playing.   Such a mysterious, surreal and incredible landscape. 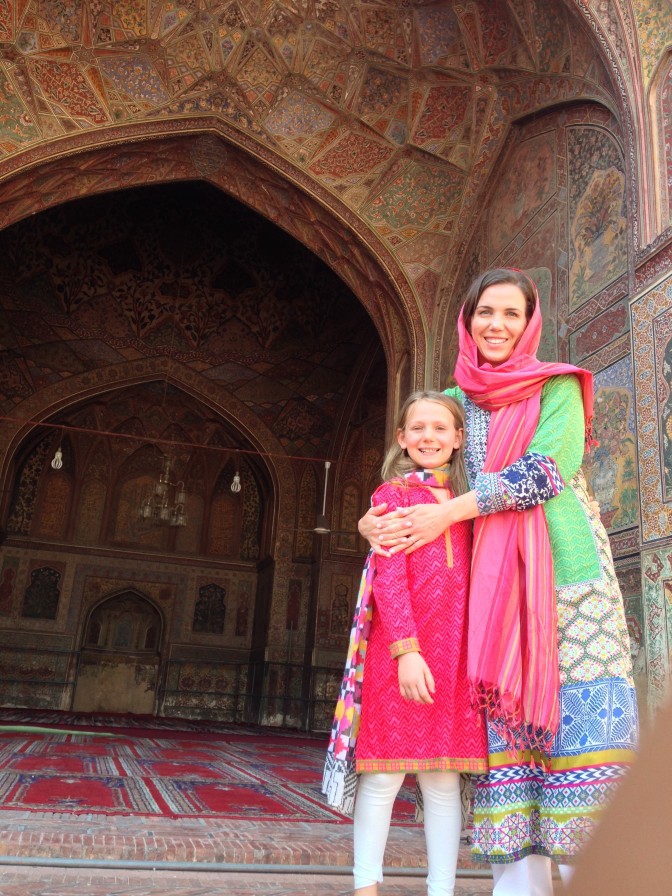 Part 2.  Lahore is a magical and mysterious city.  It is one filled with rich culture, delicious cuisine, grand architecture, lush greenery and wonderful people; but it also a city of deplorable filth, intolerable noise, gross injustice and utter despair.  These two opposing worlds meld together to compose an elaborate portrait of realism.  There are moments when I feel as if I am living in a Goya painting: fantastic and romantic and simultaneously devoid of illusion and full of suffering.

And I am in love with this city.

Part 3.  Dharampura is a lower-middle income district in Lahore (which is clearly not the same “lower-middle” income bracket of the US).  The area was congested, filled with rickshaws, cars, carts and donkeys, beggars, workers, buildings, corner to corner shops and food carts.  While we were there, a beggar woman came to the door, her child on her hip.  I just barely noticed her as the management accompanying us shoo-ed her away.  But then, upon our departure, another woman approached the car with a bowl, her infant’s legs just visible under the veil of her dupatta (shawl).  She stood next to the car window, tapping on it with her bowl, and begging for something, anything.  At that instant I was overwhelmed with the injustice of this whole rotten, beautiful world.  Those two children will have no future simply because they have had the misfortune to be born into destitution.

My friend, Faiza, touched my hand and said “don’t worry, you’ll get used to it.” But the truth is, I don’t want to “get used to it.”  Instead, I hold on to the hope that those children can have a different, better future.

Part 4.  At the main outdoor shopping district called Liberty we encountered, among other novelties, a monkey doing tricks under the command of his keeper, several handicapped and disfigured beggars, and peddlers of anything and everything, all juxtaposed against the backdrop of colorful clothing, shoe and fabric shops.  At some point during our stroll I noticed a few women perfectly kept, their hair pulled back and their faces flawlessly decorated with powder and blush, eyes lined black and lips colored a beautiful shade of red.  I soon learned that the women are actually what they call “unix”-es:  transvestites who are marginalized by society and forced to beg for money because they are unable to find work elsewhere.  Yet still, despite their predicament, they seemed proud and entirely put together, such an extreme contradiction.
By:  Courntey Boyle {courtneyboyle4@gmail.com}
Dear friends, we invite you to hold these stories of hope, struggle, beauty, ugliness close to your heart.  What rises up in you?  What do you find yourself thinking about?  What injustice captures your attention?  Comment below or email us with any ideas, questions, and wonders.

The place God calls you to is the place where your deep gladness and the world’s deep hunger meet. -Frederick Buechner